The lectures organised in Yerevan in October were a great opportunity for Armenia Tomorrow to cooperate with the leading Armenian universities – State Engineering University of Armenia (SEUA) and Yerevan State University. Our first two lectures were organised in SEUA. We were greeted by Prof. Dr. Gagik Kirakossian who helped to organise the events. After a small excursion through the university we preceded to the building #9 where our lecture auditorium was and I started with my lecture on the topic of “Mergers & Acquisitions”. This was a thrilling experience not only beca 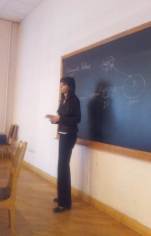 use of the great atmosphere and the enthusiasm of the students but also because I could finally see my dream of going back to Armenia and being able to do something useful starting to come true! Also, thanks to these lectures, I discovered how I like teaching. After my first lecture I got a lot of questions ranging from “What place has the goodwill in the valuation of the company” to “What is the revenue structure of the M&A Advisory Business”. After this, Curtis MacDonald talked about “Entrepreneurship and Startups” giving the shorter version of his lecture aimed at non-IT students. His lecture also drew a lot of attention.

y we were greeted in the Yerevan State University. Our lectures were scheduled to be held for the
students pursuing Master’s Degrees in Business Administration as well as Master’s Degrees in Finance. However, shortly before the lecture stared the first and second semester Bachelor students joined us as well. After the lecture there was an open, public discussion with the Professors of Economics on how to adapt the classical valuation methodologies (DCF Valuation, Comparables, etc.) to the Armenian market. We believe this adaptation is important for the future development not only of the Armenian but also of similar Eastern European markets. Armenia Tomorrow considers this one of its core future projects and will be happy to work together with economists in Armenia and abroad also interested by this topic.

Finally, on Thursday we gave lectures to IT and Systems Engineering Master students in the State Engineering University of Armenia. Curtis MacDonald gave an outsiders perspective on the startup environment in Armenia and presented some inspiring examples of worldly renowned IT products developed with limited original financial backing –such as the Wikipedia Foundation or Craigslist.

Armenia Tomorrow is thankful to both universities and the organisation “PROFESSIONAL AND ENTREPRENEURIAL ORIENTATION UNION” for organising these inspiring events and is looking forward to the future cooperation.